Held in October, the Philadelphia-based Party with a Purpose gala raised critical funds to support AACR programs and initiatives. During the gala, local philanthropic leaders Sarah and Daniel Keating were honored with the Humanitarian Award for their charitable work on behalf of cancer research, and Stephen C. Rubin, MD, Chief of Gynecologic Oncology at Fox Chase Cancer Center, was honored for his scientific achievement. Left to right: Jack Donnelly, recipient of the 2016 Party with a Purpose Humanitarian Award, and his wife, Kathy; Daniel and Sarah Keating; Stephen C. Rubin, MD, and his wife, Anne; Gina Mantia-Smaldone, MD, recipient of a $50,000 grant from Dr. Rubin as part of his award; committee president Beverly Fassler Goldberg; committee member John J. Parker; and AACR CEO Margaret Foti, PhD, MD (hc).

The comprehensive breadth and depth of its scientific expertise—and the innovative programs and initiatives it manages in support of its mission to prevent and cure all cancers—make the AACR a beneficiary of choice for philanthropic individuals and organizations and anyone focused on the cancer problem. The AACR Foundation builds a community of these supporters, providing them with opportunities to direct their resources toward the development of groundbreaking advances for cancer patients.

The AACR marked its 110th anniversary with the launch of a new campaign to increase public awareness of the organization and its mission. Titled “Leading Discoveries, Targeting Cures, Saving Lives,” the campaign emphasized the AACR’s vital role in driving advances against cancer through its support of innovative research. In addition to television and radio advertisements in the organization’s headquarters city of Philadelphia and in Washington, D.C. (the location of the AACR Annual Meeting 2017), the AACR also employed a national digital and social media campaign to increase support for lifesaving cancer science.

Industry scientists recognize the AACR’s critical role as a catalyst for innovation, and in 2017 they expanded their support of that role. The AACR Sustaining Member program expanded to encompass a total of 25 corporate supporters, and the recent successes of AACR Project GENIE has earned the support of an increasing number of industry partners who see the value in the project’s goal of advancing cancer treatment by linking genomic data to clinical outcomes.

During the 2017 Annual Meeting, one of the AACR’s longstanding supporters made a dramatic gesture of its commitment to the AACR’s mission. Amgen, whose relationship with the AACR began in 1996, announced a $1 million contribution during the Opening Ceremony. This unrestricted gift will accelerate progress against cancer by enabling the AACR to identify and pursue the most promising areas of inquiry.

The AACR Runners for Research team enables cancer patients, survivors, caregivers, and their friends and family to challenge themselves while advancing the AACR’s mission. Team members participated in 20 races across the country in 2017, raising more than $450,000 to support lifesaving cancer research. More than 750 team members participated in the team’s three signature events—the AACR Runners for Research 5K Run/Walk at the Annual Meeting in Washington, D.C.; the AACR Philadelphia Rock ‘n’ Roll Half Marathon in September; and the AACR Philadelphia Marathon in November.

The AACR strengthened its connection with its home city of Philadelphia in 2017, building upon existing relationships and establishing new ones to increase awareness of the AACR’s mission and to raise funds to support it. 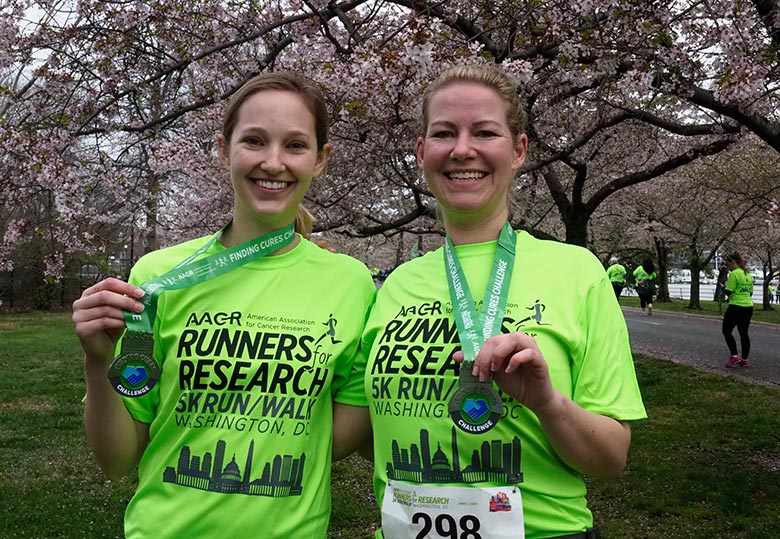 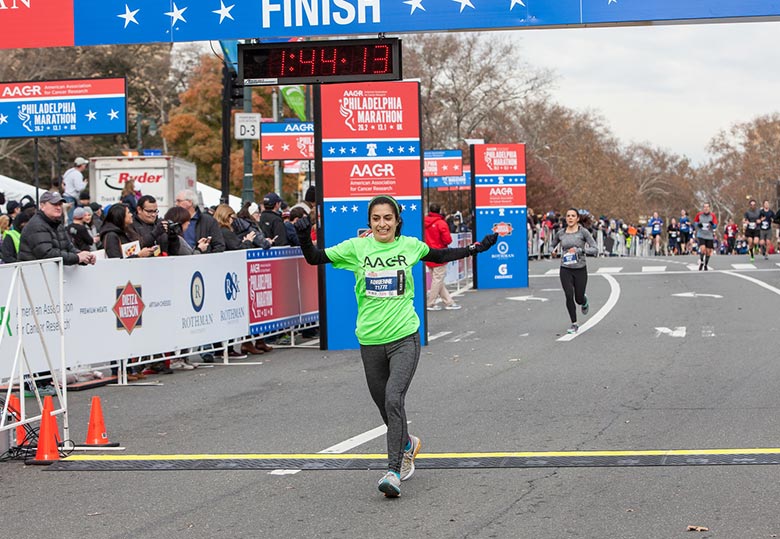 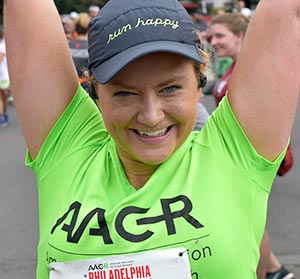 Sarah Happy, a 32-year-old lawyer who lives in Philadelphia, was a two-time cancer survivor by the time she was 25 years old. She was diagnosed with lymphoma in 2007 at the age of 22, and after a regimen of chemotherapy and radiation she was declared cancer-free ten months later. In 2009, as she preparing to begin law school, she was diagnosed with cervical cancer. After two surgeries, Sarah was again declared free of cancer.

While Sarah remains cancer-free, she continues to manage the side effects of her treatments and other challenges of cancer survivorship. Her experiences as a patient and survivor have taught her the importance of research. She became an AACR Foundation ambassador, speaking on behalf of the AACR and cancer research and participating in AACR events as a member of the Runners for Research team—including running her first half-marathon at the AACR Rock ‘n’ Roll Philadelphia Half Marathon in September.

“I am an AACR ambassador because I think it's important as a survivor to talk about what the AACR is doing and make sure that people—not only cancer patients but cancer survivors—know about the latest in science. I'm doing as well as I am because I’ve had access to doctors that have the best training and know what is going on in research. I want every survivor and every cancer patient to have that same access.”

During a year in which the AACR celebrated its past, the AACR Foundation worked to secure its future by focusing efforts on a legacy giving program. The group of distinguished and generous individuals who have to date pledged to support the AACR through an arranged estate, endowed, or other planned gift are celebrated with membership in the Dr. Bayard D. Clarkson Legacy Society. The legacy society was renamed in 2017 for Dr. Clarkson—a Past President, a fifty-year AACR member, a Fellow of the AACR Academy, and the Founding Chair of the AACR Foundation—so that others would be inspired by his vision, his generosity, and his lifetime commitment to improving the lives of patients through cancer science and medicine. 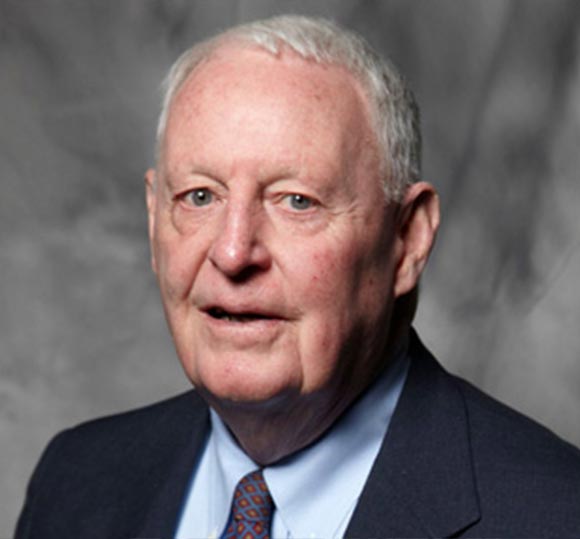 Annual Giving is an important component of the overall philanthropic plan at the American Association for Cancer Research Foundation, and affords all donors an opportunity to sustain lifesaving cancer research and related mission activities of the AACR. We gratefully acknowledge those individuals and family foundations who gave $500 or more, and those special events, associations, corporations and foundations that contributed $5,000 or more during the calendar year.

This society honors individuals who have invested in sustaining the future of the AACR by establishing an estate, endowed, or other planned gift to the AACR.